In Bahrain, Lucia had worked with lots of Philipinos and Mark enjoyed his weekly bike-rides with his Philippino mountainbike group. They always very friendly, kind and mainly positive people. You would’ve heard similar words about the Philippinos during news-coverage of the disastrous typhoon Haiyan that hit parts of the Philippines in November last year. Many of the foreign aid-workers were surprised by the positive attitude of the people and how quickly they got on with re-building their country. We were both very keen to go and explore the home country of all these people that we’d met in Bahrain. Obviously we took into account the disaster that had taken place, but as the Philippines is a very large country the typhoon had only hit certain parts. With the thought in mind that this is the time the tourist industry needs our (limited) money most, we arrived to Manila’s not-so-great airport (worst airport in 2013) on December 24th.

Already some time back Lucia’s little sister – Michaela (Miska) – had booked her flights to come and join us in the Philippines for 2 weeks. From December 31 until January 11 we would go to Palawan with her to enjoy it’s beautiful beaches and nature. That meant that we had to do a bit more planning ahead of time than we normally do. Especially since this is peak-time for the beaches in the Philippines as they’re packed with European sun-seekers and Australian holidayers. This still gave us about a week in the Philippines to fill in before Miska’s arrival.

For Christmas we booked a stay in

(supposedly) a nicer hotel in Manila (BSA Twin Towers). This turned out to be quite a disappointment, as many of the ‘luxuries’ we were hoping to get from the extra money we spent (nice pool, good breakfast, clean room) didn’t work out and put a bit of a shadow on our Christmas days. We did get to spend 2 days

watching christmas films on tv, got wished ‘Merry Christmas’ about a hundred times and had a nice home-made Christmas lunch. We Skyped with both sets of parents on the evening of the 24th and after Mark’s mum revealed to him for the first time that it was really the man’s task to prepare the traditional Czech/Slovak Christmas potato salad, that evening he made the kitchen his domain (with some help of course). It wasn’t bad at all for a first time! It also shows that no matter where you are, how long you’ve not lived at home and whatever you are doing… you still listen to your mum!

two nights in a nice lake-side guesthouse/resort in Talisay and in the morning took a banca (small boat) across the lake to the volcano. There you hike up a sandy path for 45 min (or you ride one of the many thin, malnourished looking horses) which will get you to the edge of the crater. Pretty cool views, both of the little island and the surroundings. The rest of our time in Talisay we wondered around the streets of this small town and had a look at their church, market

and had some delicious chicken, shrimp and aubergine at Ramon’s. Ramon is

born in Talisay and spend 10 months a year on cargo-ships around the world (he’s been to Rotterdam and didn’t like it much :-)). On the side he also runs a restaurants and breeds and trains fighting cocks. Apart from the money made from betting on your own cock, selling a ‘winner cock’ will make you over US$100 a piece.

We had to do a bit of research how to get to Talisay from Manila as it’s not always easy by public transport. It’s doable as a day-trip, but leave very early. For people wanting to do this trip, here’s a short summary of how went about it: We took a ‘Jam’ bus from Cubao in Manila (PHP 104 pp), got out in

Tanauan, walked 10 min to the jeepney station next to the McDonalds, took one of the many jeepneys (see pic) to Talisay (PHP 23 pp), got off on the main street just before the jeepney turns to the market and then took a tricycle (usually not as full as on the pic) to the guesthouse (PHP 20 pp (only 10 if you walk a bit first and flag one down)). On the way back we did the same thing, just flag down a bus on the road to Manila opposite to the Caltex petrol station. You’ll get buses going to Cubao and Buendia so make sure you know where you  want to go

Once back in Manila we wanted to experience a bit more of the ‘city-life’ and therefore stayed in the urban part of Malate (Chill-out guesthouse). From here walked to Rizal Park which is a wide open stretch with grass, trees, benches and several monuments. From there it was a short walk to main tourist attraction of Manila: the Intramuros. A wall-enclosed town on the coast of

Manila, originally set up by the Spanish in the 16th century. Although conquered by the British for 2 years, attacked by the Dutch, ruled by the Americans and occupied by the Japanese it was still in it’s original state until the end of WWII when the Allies (read: USA) had no other

choice but to bomb it in order to chase the Japanase out. Most has been re-build and make a nice walk passing cathedrals/churches, shops and the main highlight: the fort. From here we walked back all the way to Malate along the Baywalk, enjoying the sunset, passing by street-vendors, playing kids and the American Embassy the size of a small fort itself.

on plastic seats on the main bar-road. Lady-boys, elderly white men with young Philipino girls (/boys?) and lots of cars with blinded windows passing by sums that street up. It did seem a bit seedy and we’d already heard that the more upclass establishments can be found in Makati, but still quite good fun to watch. Also it was double

rendez-vous time: we met up first with Karen, Lucia’s Philipino colleague from Bahrain. We met up in the SM Megamall

manga-gathering. Also Mark got his second hair-cut away-from-home and this barber Jason (you’re so handsome sir… / you like a model sir…) gave him a more ‘trendy’ look, a much better job than his counterpart in Xiamen. After that Karen showed

us her lovely home. That evening we also had agreed to meet with Patricia (a Slovak friend from Prague) and her group of Czech friends who were in the Philippines for surfing and general holidaying. A dinner and a few beers later we said goodbye and agreed we would try to meet up a few weeks later again.

Manila is not a city of sight-seeing. It is noisy, crowded and seems a little bit seedy. We knew this in advance so we were prepared and still had a good time, but weren’t impressed by the city. We also think this might’ve been caused by the previous

experiences in Beijing and Taipei as these are hard to beat. Generally we were warned by many about the safety issues in the Philipinnes, especially Manila. We found that like in most large cities around the world you have to be careful, watch your valuables and don’t go walking on your own in dodgy places in the dark. We didn’t notice anything and weren’t put in threatening situations at all, but purely because you hear so much about it, you become more cautious. So as they say: be vigilant, but not let it freak you out.

We then checked into a guesthouse (DG Budget) on walking distance from Terminal of the NAIA airport and for the first time in our lives picked someone (Miska in this case) up from an airport by foot! The next day the three of us flew to Puerto Princesa on the island of Palawan!

A selection of pics from Manila and Talisay below, more you’ll find here 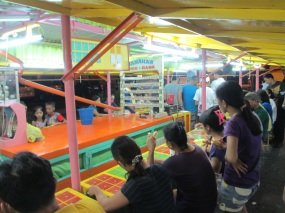 Gambling on the street

On our way to Taal volcano 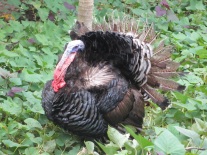 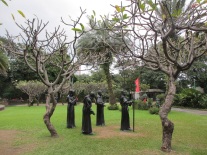 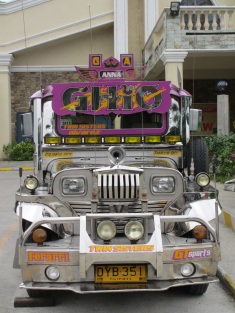 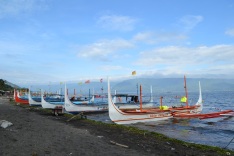 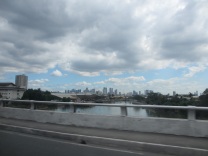