Everybody who comes to Myanmar should visit Inle Lake. Although one of the most visited tourist spots in the country, Inle Lake offered us 5 relaxing days that we enjoyed very much. Our as well as most visitors’ choice was to stay in the town of Nyuang Shwe. 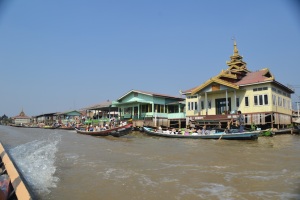 As we found out on our trips around the lake it is also pretty much the only place for backpackers to stay. Before starting the 3 days trek to here we booked Tripadvisor’s No. 1 guesthouse here – Mingalar Inn – and it did not disappoint us. Apart from other pros of this place, we have got a welcome drink on each of the days of our stay! That is what we call hospitality!

After being on the road for almost 6 months and especially in such different places we longed for some ‘western’ food. We were lucky that the town had a french bakery and a few restaurants that made a local take on pizza and pasta. That is where we headed after we arrived. Also we were happy to find out that many local dishes were salads and so we sampled at least one kind every day. Our all-time favourite was avocado salad. To be fair, the salad is very basic, but the avocados here in Myanmar are the best we ever had.

Getting hungry now? Well, we will tease you a bit more. While searching for laundry in our street we spotted a cooking class ad on one of the agencies’ board. Great, finally we can not only tick one of our bucket list items but also learn to make food that not many have tried before. The teacher/cook was leaving for Yangon the next evening, so our only chance was to go first thing in the morning and prepare ourselves hopefully delicious lunch.

Thu Zar – the cook – came to pick us up at our guesthouse at 9am. Surprisingly she is a young lady with very good English. While walking together towards the local market she explained we will be preparing 9 dishes together but before we have to shop for ingredients. The market in Nyuang Shwe is pretty big and fishermen and farmers from around Inle lake come every day to sell their fresh goods. Stopping for shopping, tasting or just explaining what is what we spent here almost one hour.

With a basket full of fresh goodies we took a horse cart to Thu Zar’s kitchen – an open room with 2 tables, 1 counter and a table with 3 traditional coal stoves. 3 other ladies greeted us and started washing and cutting vegetables and meat. Then we started cooking. Roles were divided: Lucia was a photographer and observer and Mark took a pen and paper to write down all ingredients and processes. 2 hours later we were seated at a full table with:

The food was delicious and we are already excited to try to make it ourselves!

WIth Thu Zar and her delicacies 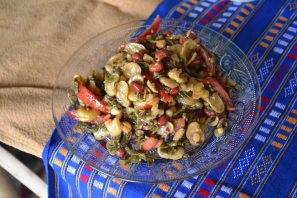 Thu Zar and her stoves

In the afternoon we stayed in to catch up with the online world at the hostel’s terrace. We were only ‘disturbed’ by loud music from amplifiers, drums and people singing. A long procession was about to pass our guesthouse and so we ran down to watch. At first two men dressed in a dancing elephant costume were being followed by many small children.

Next a long line of ladies from almost babies to old women dressed in festive colorful clothes followed carrying flowers decorated with banknotes. After this line a man dressed as a woman with heavy make up danced his way forward accompanied by his male partner. Men on tricycles, men playing drums, dancing or just walking followed. The celebrated ones came last; 2 young kids beautifully dressed and wearing heavy make-up were swinging their arms to the music on horsebacks with men holding long traditional umbrellas above them. It wasn’t easy to tell if they were boys or girls. Staff in our guesthouse told us that this procession is a monk novice initiation and the 2 kids are being escorted this way to a monastery which will be their new home now.

On the next day we decided to explore the area around the lake, we rented bicycles and started before it got too hot. Our guesthouse (as well as some blogs we found) had a nice bike route on their board and so we followed. We crossed the busy morning town and headed to the west of the lake. After a bit of dustpath a paved road lead us through fields, watergardens and villages. We climbed up to a pagoda to get a view, passed a hot spring resort and got to the last village before we would cross the lake with our bikes on a boat.

‘Mingalabar’ – ‘hello’ in Myanmar language followed us everywhere: at a monastery built on stilts on the water, at a pagoda where we had some green tea with local women, in the village where we saw meats and seeds being sun-dried on large mats, from women making various kinds of tofu and a family doing their laundry at a communal well. Not so welcoming was a couple of small boys shooting at us with small stones as we entered their territory :).

After a short beer break at one of the temples we got on a boat and crossed the lake watching fishermen on their boats skillfully paddling with their legs and maneuvering the traditional fishing nets.

Birds were fishing too and other boats passengers where, again, waving at us from far. The other side of the lake has more fields and less trees so around noon the heat was really getting to us. Frequent stops for water or coke were necessary. One such stop brought us to a local school grounds where a performance just started. On a small stage we watched kids dance in traditional costumes, a girl dancing to a burmese cover version of a western song and 5 6-year old boys performing a fashion show. Every day in Myanmar we saw a performance or celebration of some kind. We finished our day at a french bakery in town still in need of our dose of western food. 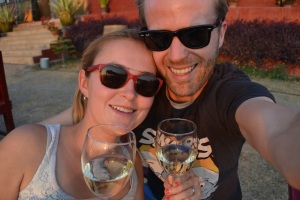 One more time we rented bicycles to ride to a vineyard on a hill next to the lake and watch the sunset. Red Mountain vineyard is the only place in Myanmar where we saw grapes and tasted wine. We started with a tasting set of four glasses. Not expecting much from south-east asian wines we were very much surprised! The wine was not sweet as they usually are here and we quickly found our favourite of which we ordered a few more glasses. The ride back was fun!

We spent a couple of more days in the town just relaxing or walking around. After 5 nights we booked a bus ticket to Bagan.

Take a look at the best pictures from Inle lake in our Google plus album.

3 thoughts on “Cooking and Biking at Inle Lake”