We were really looking forward to staying a week at Marieke and Nick’s, spending time in Sydney and have a ‘home’ with fridge and sofa for a while. We’ll write about our great time here at a later point. What would come after Sydney we didn’t know yet. We were however sure of one thing: it would involve driving around for a few weeks in a campervan! During our week in Sydney we needed to get two main issues sorted: Where would we go and how would we arrange a campervan. This post will be slightly ‘technical’ and explain how we decided on these two points, our experiences and adventures will follow in next posts.

Let’s start with a bit of an understatement: Australia is a big country. This image (Mapcollection)  gives a good idea of its size.

To be honest we didn’t really realise how big it is and there was no plan either. Where would we go from Sydney? West via Adelaide to Perth?  Make up or way up through the Northern Territory to Darwin? Follow the East coast to Cairns? Again, it’s such a big country so it’s hard to choose, not only because of the distances, but also you have to take into account the time of year and the different climates. North Australia has a tropical climate, central more dessert-like, the south gets more rain. April means autumn in Australia with it’s different effects on the various parts of this country.

We read and heard great things about the Great Ocean Road west of Sydney, the route to Perth seemed to be a less-travelled thus interesting option and the rough dry and desolated Northern Territory (central Australia) sounded like an adventure as well. We choose the popular 3000km long eastern coastal route between Sydney and Cairns. We were looking forward to tropics in the North, lots of ocean/beach on the way, beautiful national parks and very importantly now that Lucia got her PADI (Scuba in Sipadan): a chance to dive the Great Barrier Reef. Having decided on our route, we could turn our attention to our mobile home for the next 3 weeks

We knew there were three main options for getting a campervan: 1) buy (and later sell) ; 2) get a relocation deal; 3) rent . Here are our findings on the three:

1) Buying: The big advantage here is of course that you potentially keep your costs very low by selling the car for not much less than you bought. However it takes some time to buy and sell a car (registration, insurance, checkup etc) and quite a few people we spoke to recommended not to buy a car if you plan to travel for less than 2 months. There are lots of backpackers that do go this route and we decided to have a look what would be on offer. Via one of the rental agencies we found an underground carpark in King’s Cross in Sydney where people can ‘display’ their vehicles for potential buyers. After we had a look here, we made up our mind: buying a car would not be the way to go.

2) Relocation: Campervan relocation deals are a great way of getting around Australia for little money and we were very serious about this option. Lots of people will rent a van from point A to B without coming back to A. So a campervan rental company ends up with its vehicles in one location while it needs them in another. They then offer a deal for bringing these cars back which usually includes very low rent (down to $1 per day), claiming back petrol expenses and sometimes even a relocation allowance. The big disadvantage of these relocation deals is the limited time you get to bring it back. Typically you’ll get about a week for the Eastern coast route from Sydney to Cairns which means 400-500km per day. Doable of course, but we agreed that this is not what we had in mind when coming to Australia. So although we still think relocation is great low-budget way of seeing Australia, for us it was too rushed.

3) Renting: So that left us with option 3, renting a campervan. Next question: what kind of campervan? Big American full option RV? Cheaper low-top van? Relatively comfortable high-top van? Or even a larger car with mattress in the back or a tent for outside? We eventually found out that we could get much better deals if starting our journey in Cairns and drive back to Sydney. Apparently backpacker season was coming to an end which meant a lot of cars were in Cairns now and needed to be brought back to Sydney. So after confirming that flights from Sydney to Cairns were pretty cheap we narrowed our options down to two: a cheap low-top version from ‘Hippie campers’ and our preferred, but more expensive high-top option from ‘Travelwheels’. We were about to go for the Hippie offer and sent Travelwheels a mail to let them know their offer was too expensive. This is where our lucky run started in three steps:

Travelwheels offered us a ‘price-match’ on Hippies’ offer, would have to change the high-top to a low-top but would include a full ‘everything-covered-no-excess’ insurance. We agreed as their cars got better reviews online and we would get full insurance coverage for the same price. We were satisfied.

The next day we went to the Travelwheels office to sign the contract and were told our low-top actually wasn’t available for our dates. Would we mind to get a free upgrade to a (normally 50% more expensive) high-top? No, we wouldn’t mind. Only thing to watch out for was that the fuel-gauge didn’t work and needed to be fixed. This meant that in the worst case we would just have to make sure to put petrol in every 500km. We were happy.

After flying to Cairns and having arrived to Travelwheels’ local agent we were asked to wait for an hour as they still needed to fix the petrol-gauge. Not a big problem. We came back an hour later, were kept waiting longer and then got told the petrol-gauge couldn’t be fixed… would we mind being upgraded for free to the newer high-top version with better beds, better kitchen and free GPS? No we didn’t mind. We drove off high-fiving.

We didn’t know it at this point yet, but throughout our 23 days of driving along the east coast we were so happy with the high-top option. We saw and spoke to people in a low-top; t would (normally) be cheaper, you could still easily get around, but the limited space, lack of seating area inside and cooking outside makes it all a bit … well … less comfortable. This is what our Toyota Hiace High-top campervan looked like:

For outside seating it included a removable outside table and camping chairs (with beer-cooler:-)). On the inside it had a small 2-burner gas-stove, running water (40l tank), a decent-sized fridge and lights, all powered by a second battery which would be re-charged by driving or plugging in on campsites. This meant that for the entire trip we could do our own cooking. Two long seats and a table would turn into a double bed at night. 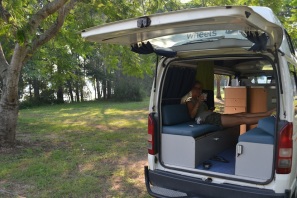 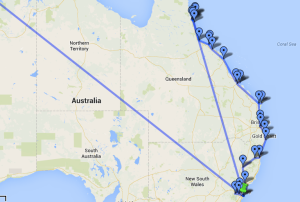 As you can see on this map (for more details click here), most of our journey was along the coast, with the last week being more inland. We slept in a variety of place, ranging from well set-up campsites to natural parks to grass behind a backpacker hostel to rest areas along the motorway. We didn’t do our research beforehand and were a bit disappointed by the low amount of free spots where you could easily and legally park you campervan for the night. A great help was an app we downloaded beforehand called ‘WikiCamps‘. People add their review to various places where you can camp. We completely relied on this for finding spots to stay and would recommend it to anyone doing a similar trip in Australia.

In the next few blogs we’ll go into a bit more detail by grouping our experiences in several Ausome Australia categories.

One thought on “Ausome Australia: Camping”