It was one of our main reasons for picking the eastern coast route: Open-window driving with the sea breeze coming in, exploring the beaches and dipping into the water here and there. Add to that world-renowned scuba and you have a pretty good travel program. This post will be on what we saw above, under and next to the Coral Sea.

The largest part of our ‘seafront driving’ we did in Queensland (Australia’s Northeastern province) along what’s called the Coral Sea. We then went inland pretty much after entering New South Wales (Southeast) which is were the Tasman Sea starts. The charm of the Coral Sea beaches lies in it’s natural roughness: sandy with large rocks, small stones, seashells and vegetation with ‘green’ dunes protecting the land behind it from the ocean. The Great Barrier Reef stretches out over 2300km along the coast and effectively works as a wave-breaker. This results in a fairly quiet sea in the northern part of Queensland while you’ll find bigger waves (and more surfer-towns) towards the southern part where the Reef ends. 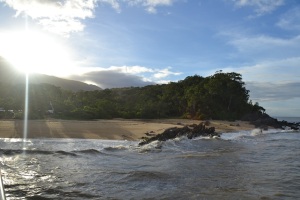 Our first ‘feet-in-the-water’ moment was in Palm Cove, a small holiday town not far north from Cairns. It was a good introduction to the type of beaches we would see along this coast and so were the warnings and restricted areas. We visited Queensland in stinger season (roughly November – April) which means you’ll find all kinds of jellyfish in the water and they can cause serious (lethal) damage to you if you get stung. The large ones are quite obvious and you can generally spot them, but the tiny ones can be lethal as well.  To enable people to still swim you’ll find swimming enclosures at most beaches.

However it’s not just stingers that you should be aware of, crocodiles and (to a lesser extent) sharks are known to be roaming around the coasts as well, especially there were fresh water creeks flow into the sea. Apart from one flushed ashore stinger in we didn’t come across any of these animals, however the possibility of encountering them meant we couldn’t just dive into any stretch of water we saw.

Making our way down Queensland’s coast was a

driver’s feast. Small, well-maintained roads took us along loads of places to stop to enjoy the beautiful stretches of beach and impressive sea views. It was such a treat to stop at a picnic area at the beach, put some food on the public ‘barbie’ and top it off with an hour of relaxing on a (sometimes nearly empty) beach. We’d generally make sure we stayed the night near a beach or at least stopped during the day. To give you an impression here are some of the places we saw:

Alva Beach had lots of wood, seashells and vegetation. Also quite a few families driving up and down the beach in quads or 4WDs

Airlie Beach is known as backpacker haven with a buzzing nightlife. The beach was a bit more idyllic here, although there wasn’t much of it

The beach at Cape Hillsborough made for great pics as it was surrounded by hills/mountains and forest. You might have read about the bouncing beach visitors at sunrise in an earlier blog (see Ausome Australia: wildlife)

We  stopped at a few beaches along the  Capricorn coast. Lots of vegetation here and widespread empty beaches.

On our way to the Glasshouse Mountains we drove along the Sunshine coast and stopped for lunch at a tiny carpark with access to a rough bit of sea. This part of Queensland is already popular for surfing. The day we were there it was pretty windy!

Our last beaches were in New South Wales just south of Brisbane. We drove from the Gold Coast (yes, that’s a city) down to famous Byron Bay to spend the day and then further to Lennox Head for the night. Great views, first of the Gold Coast in the distance, then the surfers at Byron Bay. The sunset at Lennox Head (thanks Piers for the tip) was pretty cool as well with the clouds being lit by the last rays of light.

Gold Coast in the distance

The Great Barrier Reef
Anyone travelling in Australia with a diving certificate must have a very good reason not to go. Unfortunately the tour operators (I wouldn’t call them dive-schools) in Cairns are very aware of this and are able to charge ridiculous prices. But, you have to do it, so we did. We started looking around for the right (read: cheapest) agency and then thought: “This is going to be expensive anyway, so we might as well make the memory last”. So we booked the one-day ‘Get High’ package with Down Under Cruise and Dive. Two hours one-way on a large boat with a hundred (!!) other people didn’t sound great at first. However most of the other passengers went either snorkelling or did a introduction dive (we didn’t really understand why you would do your 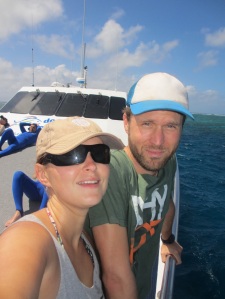 intro dive in the Great Barrier Reef as it’s so expensive and you’re mainly focussed on the diving instead of enjoying the underwater world). In the end only six other people were certified divers so the two diving groups were pretty small and it all felt quite organised and not crowded at all.

As Lucia only recently got her PADI certificate (see Scuba in Sipadan) this was to be our first dive together. Although Mark kept an eye on Lucia most of the time, he did get told off once for straying too far. This was done through a hand signal Mark had not seen before under water; something with a middle finger :-). The two dives were good, but not amazing. Some interesting fish on the first dive, great coral on the second. We figured our expectations were too high as you hear and read so much about diving here. The main impressive thing really is how widespread the reefs are. This is exactly what we could see for ourselves by booking the Get High package as it included a 10 min helicopter flight above the reefs! Between the two dives we were shipped to a floating platform where the helicopter was waiting. We were strapped in with four other people, waited for a sudden spell of vicious rain to end and then went up! It was the first time for both of us and after the initial thrill we loved the views of the reef from above. It felt like it was over in one minute! 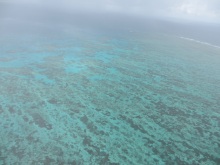 Our friends Marieke and Nick had told us about the SS Yongala, the largest and most intact shipwreck along the Australian coast. With it’s 109m length and abundance of sea life living in and around it, it sounded like a great two more dives. Mark went alone as there can be strong currents and the boat-trip out there can be very rough. Lucia wouldn’t like either of these. He went with Yongala dive school based at Alva beach, mainly because it’s only a 30-45 min boat ride from there instead of the more common 2-3 hours from Townsville. This was a good call as the sea was particularly rough that day. Actually it was the last day the diving school would set out that week as the weather was getting even worse. A week later a tropical cyclone (Ita) would hit northern Queensland.

The dives were good, visibility decent and apart from the ship itself there was lots of fish and other sea life to be seen. Most noticeably a sea-snake from about three meters distance. They are know to be very poisonous (but not aggressive to people). Currents weren’t strong once you got down to under 4 meters, but once on the surface it was pretty wild. Especially the time on the boat between the two dives was rough. Mark was advised to take sea-sickness pills which made him very sleepy once above the surface, but probably did help. No own pics from the dive, but have a look here for an idea what it looks like (incl sea-snake).