Gili Air is the most eastern island of the three Gili’s (literally: small islands), just off the coast of Lombok. The other two Gili’s are Gili Trawangan – known as the island to go to if you’re keen on partying – and Gili Meno which is the quietest of the three. From Amed in Bali you can get a boat shuttle that will stop at all three islands (IDR 250,000 pp, 45 -75 min depending on the island). All three Gili’s are known for their white beaches, blue water, marine life and – depending on the island – restaurants and bars. 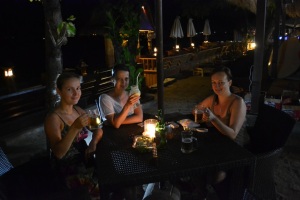 Our main reason for going to Gili Air was to meet friends from back home. It’s always quite special to meet friends in random parts of the world and this time we met with Lucia’s friend/ex-colleague Veronika and her friend Pavla, both from the Czech Republic. Most of our time with them we spent having a drink and/or food.

Freshly grilled fish, local wine, happy-hour drinks and live music were our favourites. Otherwise we hung around our guesthouse relaxing and watching big monitor lizards come and go. We initially planned to go diving, but Mark had been getting  some clogged sinuses issues in the last days in Bali, so that’s generally a deal-breaker for diving.

There are three ways of getting around the island: Horse-cart (we didnt try, but understand it’s IDR 50,000 wherever you go), bicycle (beware, it seemed pretty though to get through the loose sand at times) and by foot.

We walked everywhere and on one occasion around the whole island which takes less than an hour. We found that Gili Air had a few distinct parts; most of the activity takes places northeast from the harbour. This is were you’ll find lots of restaurants, bars and very basic accommodation all aimed at the foreign tourist. The further north you go on the eastcoast, the bigger the distances become between guesthouses and you start running out of restaurants. You’ll also have better access to the sea here. In the far north you’ll find more luxury accommodation. The best price-value places seemed to be on the northwest side. The local homes are mainly situated in the centre of the island. Our guesthouse Ugem Villages was halfway the east coast and was one of the highlights of our stay. Two buildings with an outside terrace stood in a abundantly decorated green garden just off the beach. It also had a very nicely decorated bathroom. One of the interesting features of most places on Gili Air is that the bathroom (toilet and shower) are outside. When signing in into the guestbook, to our surprise we recognised the names of our Zuzana and Lukas (Czech friends we met in Ubud) who had stayed here a few days before us! We’re sure you’ll understand why we picked this place from these pictures. 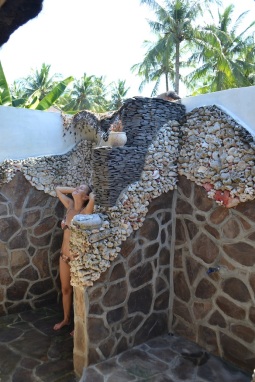 Beach in the front

Veronika and Pavla had mentioned climbing Mount Rinjani – home to a still active volcano – before we met on Gili Air, but we (read: Lucia :-)) were hesitant to join them. When we met them they had just come back and with their enthusiastic stories over dinner, they really sold it to us. We had just enough time to do the 3 day / 2 night tour so we decided to book with the same tour agency (Green Rinjani) and go for it. Thanks girls for making it sound pretty doable…but we had no idea what we were in for… 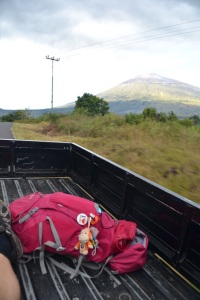 We should’ve paid more attention (in Mark’s case) or should’ve believed what we were told (in Lucia’s case) during the briefing for the three day hike from Sembalun to Senaru. We packed a bag with a change of clothes, toothbrushes, camera and some other small necessities and put it all in Lucia’s backpack on Mark’s back. All the other stuff (food, water, tents, etc) for three days would be carried up by porters. All sounded good and exciting.

Early morning on the first day we were put in a pick-up truck with some of the porters and drove to the starting point of our hike in Sembalun. First we had to go to a registration office and here we got a first taste of how popular hiking up this mountain really is. Lots and lots of people. We had pre-paid, so registration was fast and on the

way back Mark from the back of the pick-up truck took a few pics of the mountain we’d be climbing. We then started with our 26-year old guide Sahmed and a few of the porters who each were carrying a bamboo-stick with two large baskets containing around 30kg of stuff. We could’t stop our amazement,

every time we saw porters climbing up and down different parts of this mountain in flip-flops or even barefoot. We walked for about 7 hours on the first day through various landscapes. It started on a relatively flat grassy part, where our guide planted a tree to keep true to their name.

The scenery then changed into a steeper incline through forest and ended at an 2600m altitude above the tree line with already some amazing views. The porters set up our tent, cooked our dinner and all we had to do was sit, eat and have a few shots of Merunka which Pavla had kindly given us on Gili Air. It was already pretty chilly here so we retreated in our tent pretty much after it turned dark. We were getting up at 1.30am the next morning (you can’t really call that morning, more the same night) for the climb with a capital C.

(I just wanted to comment on the Merunka – one of the traditional Czech spirits made of fruits. The Czechs (and Slovaks for that matter) and their love of their local spirits just keeps fascinating me (Mark). My dad would already tell me back home that if you feel a cold coming up or you have some stomach issues, just have a shot of Becherovka (another Czech spirit) and you’ll be ok. Every Czech person we’ve met on this travel (the surfing group in the Philippines, Zuzana/Lukas in Ubud and Veronika/Pavla on Gili Air) had some kind of Czech spirit with them. Obviously they take it with them because they like it, but part of the ‘justification’ (you don’t really need one) would always be very similar to my dad’s! I for one think it’s a great habit, whatever reason or justification is used. Thanks again, Pavla, for the ‘healthy’ drink! :-))

The goal early morning on day 2 was to climb about a thousand meters up steep paths full of rocks and gravel and reach the summit before sunrise (6.15am). We started climbing with head-torches, walking sticks, long trousers, scarves and our jackets on (finally we could use these again!). We were not the only ones; a long line of lights was visible crawling up the mountain 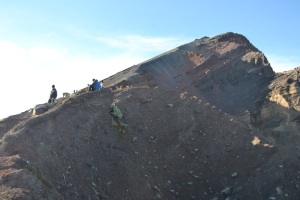 already. Lots of loose sand, rocks and the steep incline made it hard to go up. On the softer parts you take two steps up and slide one down, on the more solid parts you need to be careful not to slip. At the same time the speed of the other climbers varies and it’s not easy to overtake a larger group on a 40% incline. Add to this that in the dark you can only see a few metres ahead. It turned out to be the physically toughest thing we’ve done on this trip. But….. 4 hours later, at 6.05am, we set foot on the highest point of the mountain (3726m) and all was forgotten…. what a feeling and what a view! We could now finally see what we climbed (didn’t look like much to be honest) and what the surroundings looked like. We warmed ourselves in the first sunrays (it must’ve been only a few degrees above zero), congratulated eachother and others on the achievement and obviously took lots of pictures: 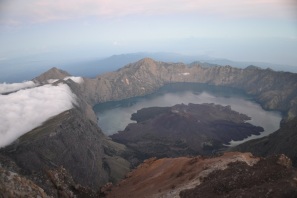 We were in a happy mood and looking forward to the rest of the day, but this turned out to be the point where we

wished we had paid attention at the initial briefing. We had hiked for 4 hours, but still had 8 hours of up-and-down to go on this day! Firstly, going down from the top was much harder than it seemed. Very slippery, dusty and your knees get a proper pounding. There were still a lot of people going up and we didn’t envy them. Because the sun was up they could actually see how steep it was and how far they had to go, which must’ve been quite demotivating. When we went up we couldn’t see much so we just switched off our minds and got on with it. Also the people coming down were creating lots of dust and were sometimes getting in their way. Our advice: make sure you reach the summit before sunrise!

It took us about 2,5 hours to get back to our tents where we had a 30 min second breakfast. We packed up our stuff and started descending for 2,5 hours where we had lunch at the crater lake. Our first ‘shower’ of the tour consisted of a jump into the cold water of the lake and afterwards soaking in the hot water of nearby hot springs. After a nice lunch we started gearing up again for the final stretch of the day: a 3 hour climb up the other side of the crater rim where we would spend the second night. Surprisingly, this went quite well and both of us made it up in good condition. We actually really enjoyed this bit as it involved some almost real rock climbing. Once up on the rim, the views were amazing again, especially at sunset. 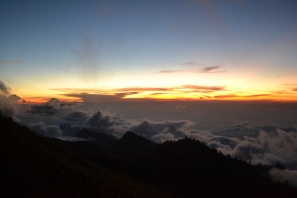 The last day was a 5 hour walk mainly downhill on rocky paths and through the rainforest. However, this sounds 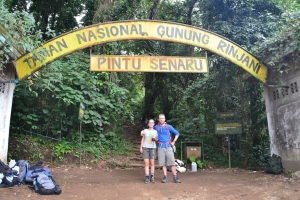 easier than it is, because by know we had gotten pretty sore legs from all the climbing and every step down would hurt. Although the whole hike was incredible, we were really longing forward to the end and stood under the national park’s gate, it did feel like a relieve. Although all might sound a bit dramatic, we did underestimate this three day tour. At the same time we are really happy we did it and would definitely recommend others to go. We now still sometimes think about the porters; they did the same thing as we did, but did it twice as fast, in flip-flops while carrying a much heavier load on their shoulders…. if you go, don’t forget to tip them! :-)

We got ourselves dropped off at the town of Praya in a very odd hotel called the Grand Royal BIL. It’s main feature is it’s proximity to the airport and the free shuttle you get, but otherwise very dissappointing. We’ve put a review on TripAdvisor, strange place. The next morning we were off to AirAsia hub Kuala Lumpur again!

One thought on “Lombok’s top”