We were getting very close to the end of our travels. After heavy culturally focused stops in Andong and Gyeongju we thought it a good idea to relax at one of South Korea’s most popular beaches, Haeundae beach in the second city in South Korea – Busan.

As holidays were on in Korea, it was busy and we struggled to find reasonably priced accommodation. In the end we settled for one of the ‘love-motels’ (Iris motel), mainly because it was close to the beach and affordable. We stayed four days and spent most of these on or around the beach.

Haeundae beach is a fairly long-stretched beach with typical tall residential buildings along the boulevard, in which the apartments are most likely owned by the more wealthy Koreans from Seoul. The beach itself was decent and – like everything in South Korea – well-organised. The beach is structured in different blocks with each straight lines for parasols and sunbeds for which you pay before enter the beach. Funnily enough, there is one bit of beach without parasols and this is the part reserved for ‘foreigners’. We weren’t really sure if this part

of the beach was reserved because the Korean’s generally were more dressed when bathing, if foreigners preferred not to pay for a sunbed/parasol or if there was some other reason. Anyway, with our (well, mainly Mark’s) delicate white skin and the sometimes burning sun, we thought it better to have a bit of shade. We had some fun looking at identically dressed couples again (see insert)… you really do see that often in South Korea.

As we said, it was pretty slow and relaxed four days in Busan, however we did undertake a few things. The main one was to visit the massive Jagalchi Fish Market in central Busan. We’d been to quite a few fish markets already, but this one was impressive. Massive crabs, wriggling squid, lively merchants and of course great

tasting fish. We stopped in one of the many small restaurants and had a mixed platter of grilled and fried fish (we’ve inserted a picture of the kitchen :-)). Another option would’ve been to eat in the covered part of the market where more sushi-type of fish was on offer. Have a look at the amazing seafood being offered: 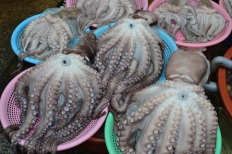 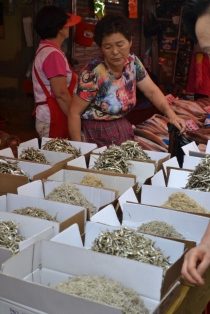 While walking around town, we saw little stands with ‘selfie-sticks’ everywhere. We struggle to remember where we saw these first in Asia, but only now, in the last country we visited, we decided to buy one. For people that don’t know this widespread phenomena yet, this is what wikipedia says about it: http://en.wikipedia.org/wiki/Selfie_stick. We were on our way to Yongdusan Park and that’s where we decide to give our new ‘gadget’ a first try. Good fun!

Yongdusan Park is worth the rather steep hike (apparently there is an escalator as well…) if you’re aiming for it’s main attraction: the 118m tall Busan tower. You apparently have a really good view of the harbour from there. We didn’t go up, but instead spend some time looking at the heart-locks on the various fences, wrote a few postcards and just sat around

Friday night, party night… It was our last Friday night of our year of travelling so we celebrated with dinner, cinema and drinks. We planned our big night out to start in the massive Busan Cinema Centre in Centum City, but… for some reason it was closed… on a Friday night? We didn’t let that get us down and found another cinema at the Shinsegae shopping mall. This is were we first massively over-ordered on food in it’s food court. No ordinary food court…a delicious food court. Great Korean sushi, Japanese curry and other Asian delights.

After seeing the film (we thought hard, but really couldn’t remember which one) we took the metro back to Haeundae and started walking down the main bar-strip looking for a suitable place to finish off the evening. We spent the evening in a bar where we saw a girl giving oral satisfaction to a banana, got invited by a Slovak speaking Australian (wtf?) to join his group of film-exhibition visiting professional friends and best of all: we saw something very familiar on the drinks menu that just seemed to make a lot of sense to order: 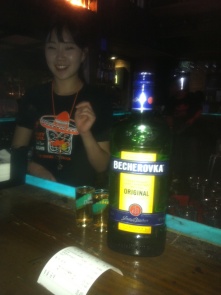 After a relaxing long weekend we left Busan for Seoul again, but not before having one more interesting speciality: cooked sea-snails (you have to suck them out of their shell) and grilled silk-worms (great protein!) for starters and then as a main a delicious squid with all the intestines still inside!